It’s Monday again, almost February, getting closer to Valentine’s and its e-commerce predictions 🙂

Over the course of the weekend or so, Bing has declared they had a cool feature which allows marketers to import Adwords campaigns to Bing Ads without needing to recalibrate everything in accordance with Adwords.

That is super cool.

Let’s talk about the upside, downside and the conspiracy theory, as we all know you guys love these 🙂

Being able to import an Adwords campaign to Bing is a breath of fresh air, as it allows marketers to maximize their resources and spend less time on optimizing in accordance with something that’s already running and works perfectly.

Here is an example of automated importing of running campaigns to Bing: 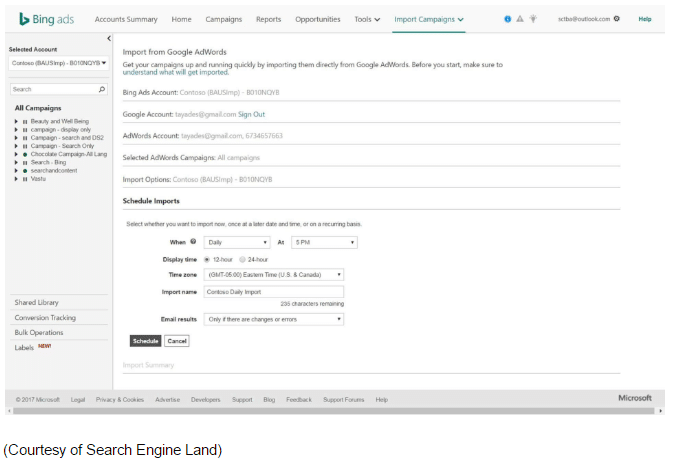 This automated importing means we as marketers do not need to update any ad-copies – just run them smoothly.

We need to understand that behavior and conversion in general isn’t conclusive for both Google as well as Bing.

Good campaigns on Bing won’t necessarily produce great results on Adwords, and vice versa as well as some campaigns on Adwords (for different geos) could offer different insights than similar ones on Bing as well as on the same platform (an Adwords campaign to the UK would not necessarily produce the same results for a similar campaign to the US).

We promised you guys a conspiracy, and we are here to deliver one 🙂

For this conspiracy, we invited over our dream friend AJ from Appenue, that deals a lot with total social media management and paid endeavors on them:

“This move isn’t something strategic on Microsoft’s side like Google’s use of Drive to gain iOS switchers to Android.

No, this is something a little deeper than that.”, Says AJ.

Last June, Microsoft acquired Linkedin and for a good reason: it lacked a standing in the social media world.

Facebook has tailored its ads to accommodate for that as well, and offers very good conversion rates for businesses on the social network.

The main battle today is between Google and Facebook for ad campaigns.

What is Microsoft’s angle then?

“Simple: offering a similar experience to Google is a great way to gain more revenue for Bing, which is the second largest search engine in the world.

Strengthening the bond between Google and Microsoft, would help hinder Facebook’s paid campaigns endeavors as two giants fighting another giant at the same time, could help crush the latter: Microsoft has decided then to split the online advertising world between itself and Google, a sort of duopoly of two giants if you will, to combat a greater threat in its eyes.” Surmises AJ.