Back in 2015, Emojis had dropped out of fashion and kicked off Google search results in terms of desktop SEO.

But Google has recently decided to put them back on. 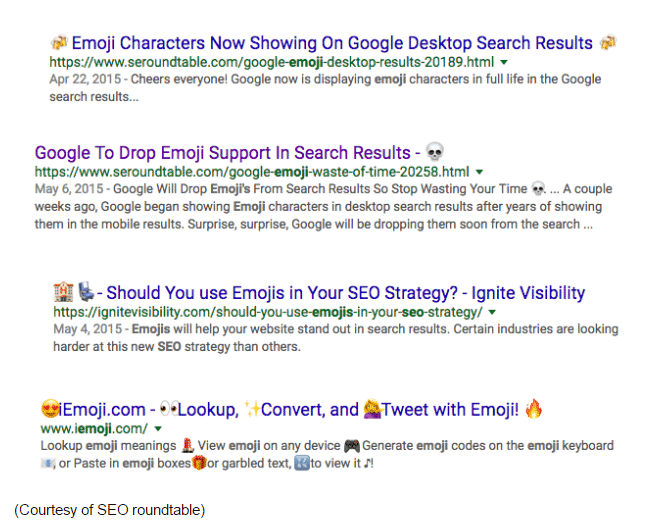 The reason? Some say it’s a bug.

We wouldn’t be surprised, as last Wednesday we talked about Google releasing outdated warnings about WordPress and Joomla sites, which made developers shake in their pants.

Google did raise a couple of red flags there, with old Google Index caches surfacing all of a sudden, which sent hundreds of developers to check that their sites haven’t been affected with mass defacements.

But, what if it’s not a bug? What if Google is trying something out?

Could it be because of social media?

Social media do possess more and more of a concern to Google (especially Facebook that has set the tone for SMO), Google wants to continue being the dominant power and emojis, naturally, are a unique way to make sure you standout in search results.

Yes, these emojis are generated on social media, but social media results still show up on search, especially among search results that give you different search categories such as “social” like Qwant.

Maybe it’s because of the mobile index, as emojis did continue appearing on mobile results but not on desktop and this is a way to facilitate a similar appearance (and naturally experience) on both mobile as well as desktop?

Google doesn’t want to appear too transparent, and doesn’t want everyone to understand what it’s doing perhaps, but when you need to take on both social media as well as competitors such as Bing that has started nibbling at Google’s desktop results in America, and with their dynamic ads (or Yandex with their ads always having photos part of them), one must wonder what might be the angle here.

It may also have something to do with the recent raising of $1.5 million by emoji startup Inmoji, that offers a self-serve marketing platform for businesses to produce branded emojis a part of their exposure endeavors.

Whatever the reason is, we will keep you guys updated.