Last Monday we talked about Qwant and how it will disrupt the way we perceive search engines; with its specific categories such as cars, social and more, Google and Bing should be on the lookout for sure.

But Qwant didn’t invent this whole “we don’t store information about your past searches” policy – DuckDuckGo did.

In general, DuckDuckGo was quite under the radar, being small and more of a niche kind of search engine.

Since its inception in 2008, 10 billion searches were made. But it hit a major milestone last year, with 4 billion searches in 2016 alone (40% of all searches ever done in a single year – 433% increase in annual searches) – that is quite the record as no storing of information meaning no studying of the individual and not necessarily training the system to show tailored information based on user preference.

Nevertheless, DuckDuckGo works, with 14 million searches done by January 10 – those are 1,400,000 searches done a day – that is a lot of information on a niche engine. 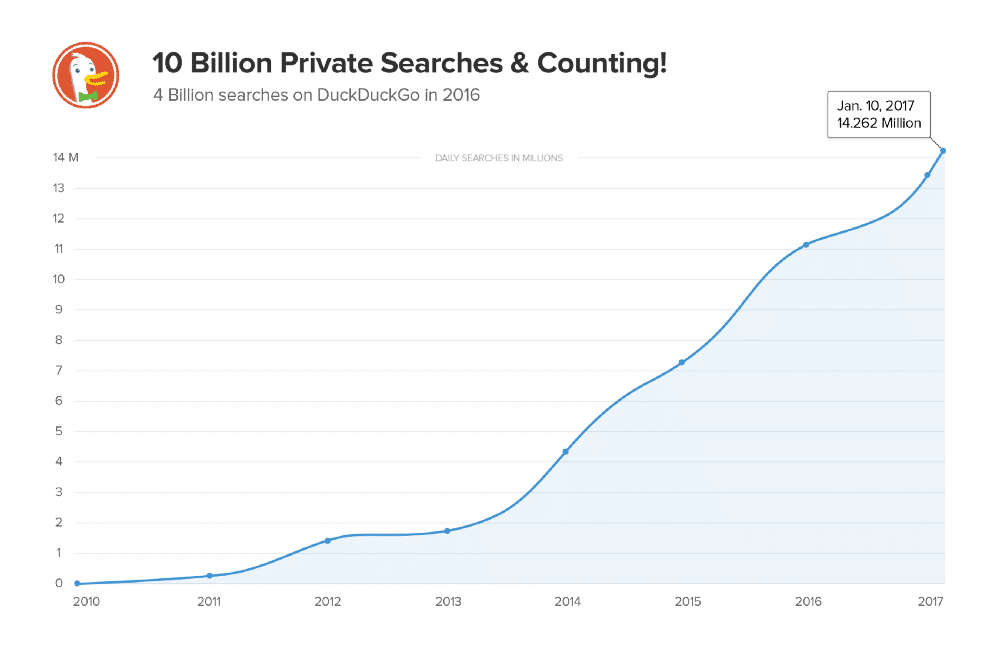 Here’s a glimpse at a one year average: 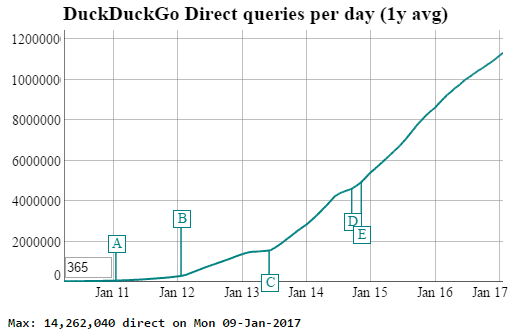 Question is: how did this engine grow so rapidly?

Quite simple: more and more people are looking for privacy, especially reporters and the likes.

Who might also use it? Well, naturally people who wish to keep their privacy intact and hate pesky ads but also people looking for financial investments or adult oriented sites without the guilt trip of deleting their history and clearing their cache.

According to this study, 40% of all Americans are actually pro-privacy, perhaps due to Snowden’s discovery of the NSA spying on the American public.

We suppose this number will increase, as more and more users had enough of someone storing information to “enhance” their user experience.

With this kind of search engine, remarketing and general targeting would be almost impossible, giving a very slick and crisp feel when surfing the web.

Businesses are still being crawled naturally, but ones that live on Adsense and the likes would just not make a revenue from users of DuckDuckGo.

Will this constitute a change of business model from ad serving to paid subscription?