Ever since Facebook has decided to wage a competition war against Google, we only benefit.

This time it seems Facebook has decided to wage war against Yelp by offering a friend’s recommendation feature via its app.

The same could be used to find new beauty salons, hardware stores and more.

A smart marketer should pay attention to these and try and get as many people that are related to people who liked one’s page to gain more credibility and organic traffic to both the page and the business at hand.

As it is only rolling out, there isn’t enough information.

In the meantime, have a look at these examples: 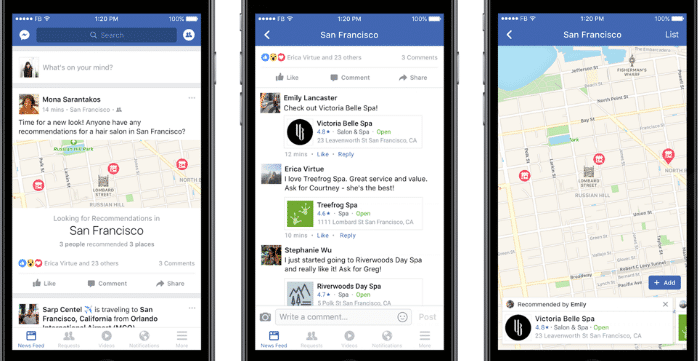 Facebook is really busy these days, with its postproduction of the Workplace app for Web and iOS to compete with the likes of Slack and Hipchat.

We expect some kind of cooperation between these, perhaps a good way to produce quick gettogethers and good places to order sushi from (a smart marketer could perhaps advertise on the new Facebook Workplace app [if permitted by Facebook] about one’s restaurant’s reputation with users of the app or Slack or what not…?).

We will keep you posted on these features, as SEO travels from the traditional ranking on Google to a more of an SMO approach via webpages and mobile apps.

There’s an evolution taking place, and we all should be there to gain the upper hand!